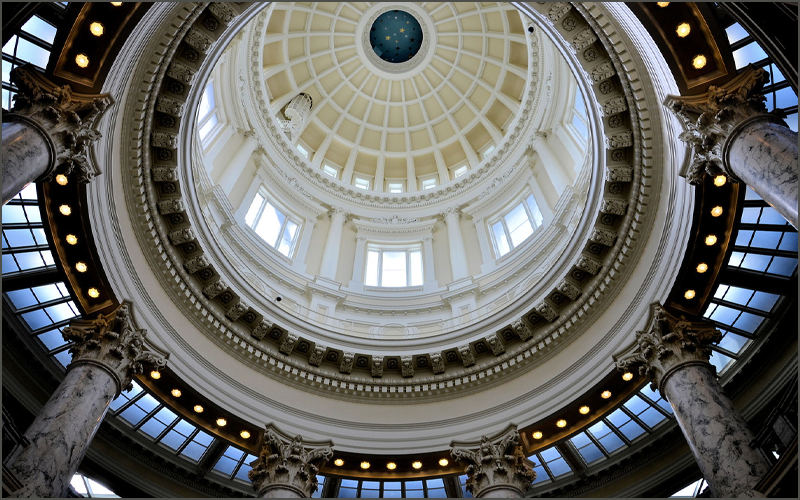 Early on Monday, the Idaho Legislature re-opened the 2021 Legislative Session, primarily to tackle the issue of vaccine mandates, especially those handed down from the Biden Administration, both to federal contractors and all U.S. companies with over 100 employees.  The two bodies of the Idaho Legislature took very different tacts in their return to activity, following the original end to the Session that took place in May. As you recall, the Idaho Senate sine’ die adjourned, back in May, but the Idaho House of Representatives put itself at extended recess, subject to the call of the Speaker, instead of fully adjourning. Taking this step has allowed the House to come back into a normal extension of the 2021 Regular Session, without requesting a special legislative session from the Governor.

In their return, the Idaho Senate gaveled in, early in the morning on Monday, quickly introducing three bills, and then hearing from Senate leadership that they would not be taking immediate action on any of the legislation. Instead, it appears the Senate will be waiting to see what the Idaho House brings forward for consideration…probably for good reason.  On the other side of the rotunda, the Idaho House had a very different approach, quickly introducing a slate of 32 different pieces of legislation, reading them across the desk and quickly referring them to their germane committees.

The Joint Finance and Appropriations Committee (JFAC), which is the budget setting committee for the Idaho Legislature, held a hearing, early in the day, but quickly killed a bill that would have established a $2 million legal defense fund to assist the state with legal fees spawning from the three separate lawsuits that have been filed against the Biden Administration and the Occupational Safety and Health Administration (OSHA) in order to block to federal vaccine mandates.

Idaho’s Governor, Brad Little, and Attorney General, Lawrence Wasden, joined two separate lawsuits in mid and late October, which took action to stop the federal government’s attempts to mandate vaccines for federal contractors and all companies with over 100 employees.  On Monday, the Governor announced they would be joining a third multi-state lawsuit, led by the State of Louisiana, which has taken a different legal approach for blocking the vaccine mandates, currently being pursued by the Biden Administration.

The Idaho House Business Committee held over 7 hours of hearings on Monday, which continued late into the evening, specifically hearing from mostly the same group of public, who were at the Capitol to voice their opinions on employer vaccine mandates.  Some opposed the different bills being proposed, mostly complaining that they did not go far enough to protect the individuals from having to be vaccinated, or potentially losing their jobs.  Others were there just to share their opinions and concerns on COVID, the vaccine and their individual health freedoms.  The bills being considered by the House Business Committee ranged from prohibiting any kind of vaccine requirements for employees, to guaranteeing certain accommodations for vaccine exemptions, all the way to establishing medical privacy requirements that would not allow an employer to ask the vaccine status of an employee. Some of the bills were held in committee, several were sent to the amending order to be overhauled, two bills were approved to go to the full House with a contested “Do Pass” recommendation and one was sent to the full House without a recommendation. The bills that were approved for full House consideration are listed below:

The House Health and Welfare Committee took a different path than that of the Business Committee, on Monday. Nine unique bills were referred to the Health & Welfare Committee at the beginning of the day, and by the end of the day no action was taken…nor would it be. House Health & Welfare Chairman, Rep. Fred Wood (R – Burley – 27) announced that he would not be providing a hearing to any of the bills that were referred to his committee. As the only licensed physician in the Idaho State Legislature, Chairman Wood, explained that he did not agree with the majority of the legislation, that it was poorly written, misinformed policy that could have negative impacts for the State of Idaho and its citizens. Continuing, Chairman Wood explained that he would be happy to work with the bill sponsors, through thoughtful negotiation, in order to propose something that was not cobbled together in an expedited timeframe. In the end, he explained that the 2022 Legislative Session is less than 60 days away, and all of the proposals could wait until then to be vetted, thoughtfully discussed, and given proper consideration.

Tuesday brought similar tracks on both sides of the Capitol Rotunda.  The Senate waiting to see what the House would be proposing and the House Committees in a flurry of testimony and bill consideration.

Wednesday’s activities were more focused on the work passed by the House, which has made its way over to the Senate.  The Senate state affairs committee took up HB 419, HB 414 and an overhauled bill from Rep. Mike Moyle (R – Star – 14) on not judging the sincerity of a person’s religious exemptions from taking the vaccine (HB 417). The Senate State Affairs Committee has been discussing the bills and taking testimony this morning, but there is definite consternation on all of the bills being presented thus far. Interestingly, the majority of the audience in the State Affairs Committee are members of the House and other Senators not on the committee.

The NWCUA Advocacy team will continue to closely monitor the activities of the final days of the Idaho Legislature, as they work to determine if additional vaccine limiting legislation is needed in Idaho. As it appears now, it may not be a short road to get to the final closing bell of the 2021 Legislative Session.