Idaho Redistricting Committee Narrows in on a new Legislative Map 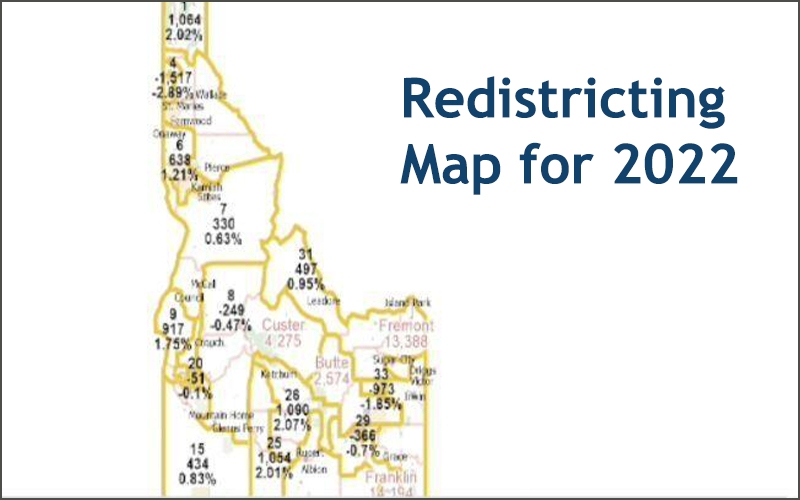 What legislative district will you be in for the 2022 election? Who will you be voting for in Congress or the Legislature in November of 2022?

Idaho’s bi-partisan re-districting commission is closing in on their recommended revisions to the structure and map of the 35 – Legislative Districts and the 2 – Congressional Districts, in Idaho, and they are hoping to answer those aforementioned questions before the end of November.

The commission’s newly released preferred option map, for the legislative districts, was presented to the public, following over 20 meetings and public hearings, and received positive reviews from the members of the bi-partisan group. The commission members expect to continue to make tweaks and minor modifications, but the basis of the map seems to be coming together.

“That’s not chiseled into stone, but that will be our working plan,” former Idaho Legislator and Co-chairman Bart Davis said. “We’re going to work in that direction.”

The newly released map shows an increasing trend to urbanize many of the legislative districts, pulling some of the historically rural districts into more urban areas to manage the population balance requirements.  This shift has witnessed the significant expansion of some legislative districts, taking on areas not previously included in several districts.  Significant input from the public, regarding communities that were closely tied to one another was definitely worked into this new draft map.

The six person redistricting commission recently broke itself into three separate subcommittees (North, Southwest and Southwest), and the bi-partisan, two-person subcommittees made some significant progress on the newly drafted version of the map.  In one specific instance, Commissioner Tom Dayley and Nels Mitchell made a breakthrough that has attempted to rebalance and reformulate the extremely high-growth areas of Meridian, Eagle, Star, Middleton and much of Canyon County.

Gem, Payette and Washington counties were shifted into the planning process for the southwestern Idaho subcommittee versus the Northern Idaho planning process, which was led by Dayley and Mitchell.  “We were better able to incorporate them,” stated Commissioner Mitchell. “You can see Gem fits together with Eagle. and then Washington and Payette fit together with the western portion of Canyon County.”

“One of the things that Tom (Dayley) and I really focused on was that there were lots of comments at the public hearings on the cities. So this draft map gives Caldwell one district, and then there are two districts that sweep up most of Nampa, and then Meridian ends up with two, almost three districts. With relatively clean lines.”

Under the current plan, Boise will have approximately five and a half districts, with Garden City being incorporated into the Boise districts. The other urban centers in Coeur d’Alene, Twin Falls, Pocatello and Idaho Falls will all see similar adjustments to the draft map, as the commission worked to meet the population rebalancing processes in those urban centers.

The NWCUA is closely monitoring the final set of redistricting hearings and meetings, and expect that we will see the final recommendations  submitted to the Idaho Legislature in mid-to-late November.