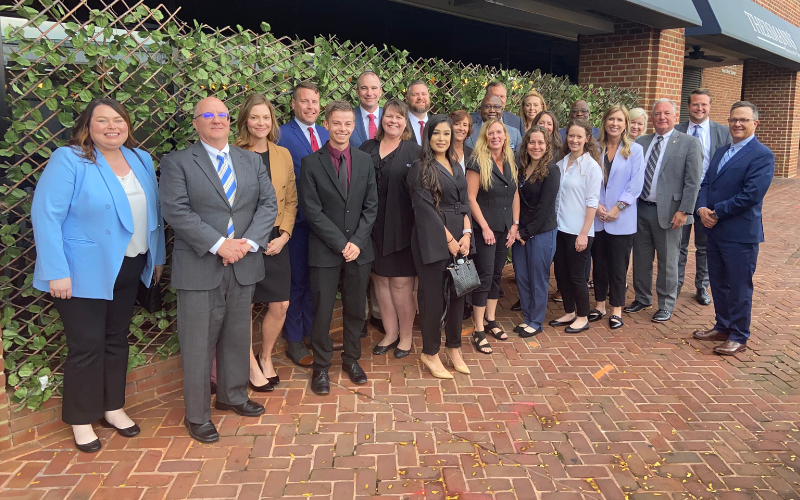 Following the meetings, two Members of Congress, Rep. Rick Larsen (D-WA-2) and Rep. Doug Lamborn (R-CO-5) signed on to co-sponsor legislation that, if passed, would modernize the Federal Credit Union Act to reduce the number of board meetings required for credit unions. This brings the number of co-sponsors of this bipartisan legislation to 102 in the House and 18 in the Senate.

Advocates also asked their elected officials to oppose the misguided “Credit Card Competition” legislation targeting interchange, pending in the Senate and the House, as it is potentially harmful to credit unions and their 133 million members across the nation. In the hours immediately following the Fall Hike meetings, GoWest advocates back in the home states, who’ve already sent more than 1,200 messages to their Senators, contacted their congressional representatives asking them to oppose the new House version of the legislation.

A new feature at this year’s Fall Hike was special programming to include young professionals, some of whom were in the beltway for the first time.

“I feel much more confident about how to engage in advocating for credit unions…and much more knowledgeable about the issues that are really important for us to stay on top of, so credit unions can continue for future generations,” said Dawn Lepore from Vantage West Credit Union in Tucson.

Virginia Gustke, a community impact representative for Bellingham, Washington-based WECU, added, “We’ve heard some brilliant ideas from some of the country’s famous leaders, and I think being able to take that home to our communities is what I’ve enjoyed most about this experience.”

The YPs received on-site advocacy training, spent one-on-one time with Rep. Derek Kilmer (D-WA-6) to learn about the legislative process, and even found a little evening to visit Washington, D.C.’s famed monuments, before heading to the Hill with the advocates the next day.

“Being on the Hill ahead of the midterm elections was timely,” said Ryan Fitzgerald, GoWest’s vice president of federal advocacy. “Between the quality, in-person meetings, and the added support of thousands of advocates from across GoWest’s six state region, credit unions’ voices were heard, and we are already seeing results.”

Regulators heard, too. The GoWest delegation attended the National Credit Union Administration’s (NCUA) Board of Directors meeting in person. Afterward, NCUA Board Member Rodney Hood and his Chief Policy Advisor, Lenwood Brooks, joined the GoWest delegation, including YP attendees, for an informational lunch.

Now Get Ready for CUNA GAC.

Each year, Spring and Fall Hikes comprised of 2-3 advocates from each of the association’s states, go to the capital to advance and complement the groundwork laid by the hundreds of GoWest advocates who attend the annual Credit Union National Association’s Governmental Affairs Conference (CUNA GAC) in Washington, D.C.  The 2023 GAC is scheduled for Feb. 26-March 2, and now is the time to budget and make your credit union’s attendance plans.

“The CUNA GAC is where we need as many voices as possible to participate,” said Jennifer Wagner, GoWest’s executive vice president and chief advocacy officer. “GAC is ideal for larger groups of advocates, from seasoned veterans to first-timers, to attend and make a difference. Considering that the 2022 midterm elections will result in many changes in the House and Senate, it will be important for our credit unions to show up in force.”